Is the dog fearful, or crouching? Does it matter, when you’re training?

The world of animal trainers is divided, and I find that some trainers avoid the subject of animal emotions altogether.

“There’s no need to factor in and understand emotions, just deal with the observable behaviour”, is the gist of what some trainers and animal professionals say.

No doubt their unwillingness to consider emotions stems from the Father of Behaviourism, influential to this day. Skinner said: “The ‘emotions’ are excellent examples of the fictional causes to which we commonly attribute behavior”.

I’m not dwelling on what he actually meant by that (…fictional?).

Anyhow, most modern animal trainers don’t question that animals have emotions. It’s just that when it comes to dealing with animals, many tend to address the observable behaviour rather than the emotion that goes with it.

A simplified description of such an approach may be: “if crouching is an undesirable behaviour, let’s make some changes to the environment so that the animal stops crouching.”

And it works, too. I’m not disputing that. At least in some cases – and I’ll get back to when I think that approach completely misses the target.

I’m just compulsive about looking at everything from different angles.

It works – but is there a better way?

Can we improve wellbeing and reduce suffering of animals in our care by factoring in their emotions – on top of being good observers? 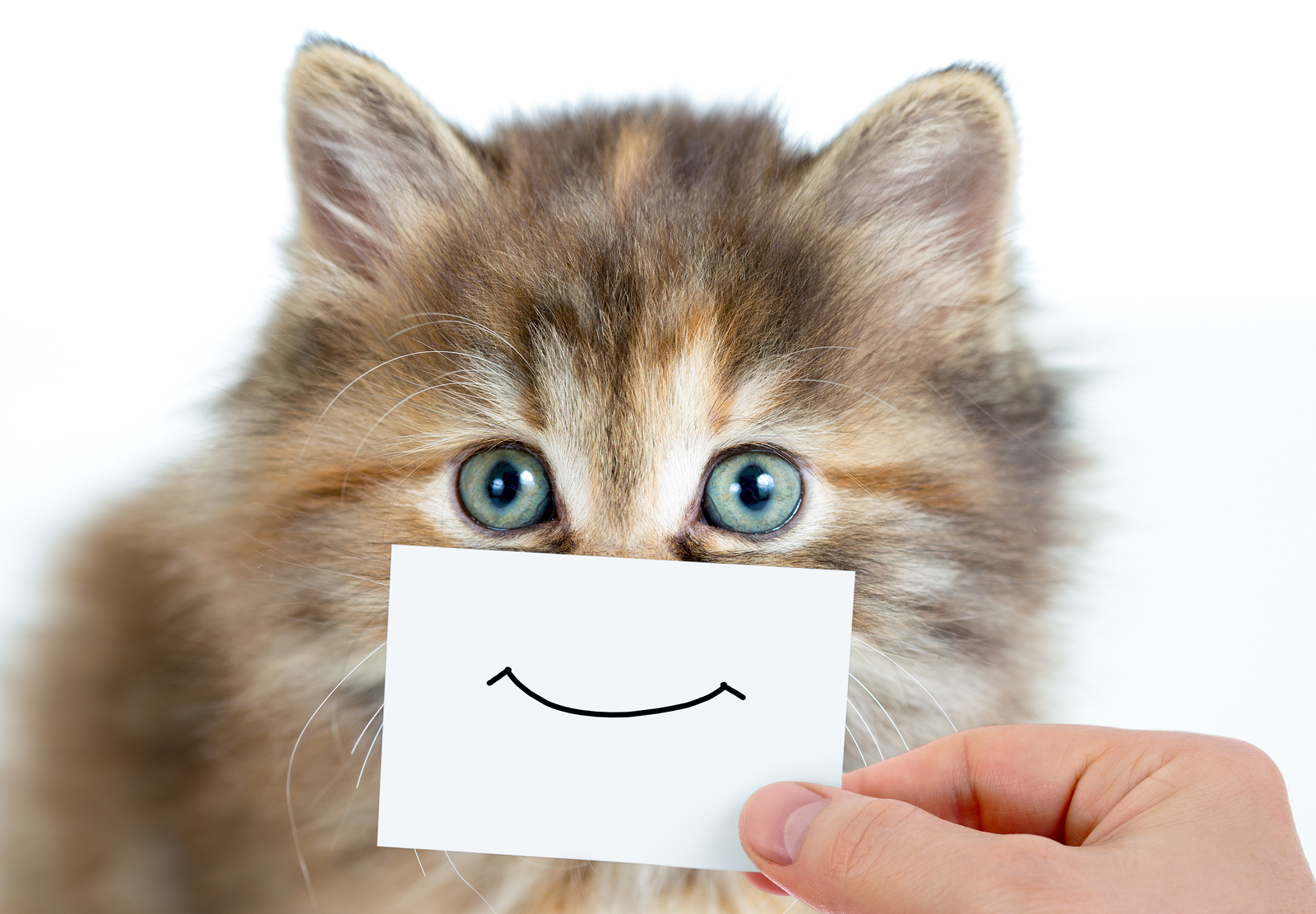 Taking emotions into account when interacting with animals in our care could:

A pinch of anthropomorphism

Anthropomorphism (the attribution of human traits, emotions and intentions to animals) is a word with extremely negative connotations. For many animal professionals, it’s a no-no.

Or better yet, a spice.

Overused, it can spoil everything.

And yet – just a pinch can make all the difference.

I don’t like sizzling hot food, so I use very little. Just to bring out the flavors and add that little extra something.

OK, Karolina, very interesting. But how does cayenne relate to animal emotions and anthropomorphism?

A pinch would be the equivalent of thinking: I wonder what situations could cause this animal to be fearful.

Overuse would be comparable to thinking: I’m afraid of snakes – therefore this animal must be too.

Finding the right balance is important. Don’t project your own emotions or intentions on the animal, but observe closely and think “is there an emotional state that could be involved in producing this behaviour?” or even ‘could this situation trigger some important emotional reaction, and if so, is it a desirable emotion or an undersirable one?”

I’ll focus on fearful behaviour in this blog post. In core emotion lingo, the emotion is FEAR, written in caps.

If we take emotional states into account, we can predict where problematic situations might occur. Different species tend to have different reactions when they’re afraid, for instance. In addition, prey species tend to be more fearful than predators. They’re generally more easily startled, and respond to a wider range of stimuli – different depending on the species.

Armed with this knowledge, we can prepare escape routes: set up the environment so that the animals get the opportunity of doing what they evolved to do when they’re fearful. I discuss  and illustrate this in my senior lecturer’s exam lecture, part 2 about ethology, but here are some pointers:

Before you ask: yes. Dominance is a very important mechanism when it comes to monkeys’ social lives. The dominance concept may be severely misunderstood and misused with regards to dog or horse behaviour, but many species, including most monkeys, show distinct dominance hierarchies, especially in captivity.

Ensuring that animals have opportunities of reducing fear by performing species-typical behaviour is key.

Yes, they may get frightened. Such is life. But if they do, they can do something to reduce that fear. They’re in control, as it were.

Animals in control have higher welfare.

One of the reasons why core emotions are so powerful is that they have tremendous survival value.

An animal that doesn’t respond with FEAR to danger will likely not survive long. So, animals need to come prepared to respond fearfully to relevant stimuli.

There are innate fears. Almost all mammals and birds, regardless of species, will respond with a fear reaction to the following triggers – without prior learning:

In addition to these innate fear triggers, there are learned fears.

The cat learns that the transport box predicts going to the vet to get a shot, which includes exposure to loud noises, novelty, lack of control and pain. The transport box thus predicts innate fear stimuli. A whole bunch of them. Trigger stacking, so to speak.

Is there anything you can do about these fears, innate or learned?

Consider what type of stimuli or situations that may occur that could potentially trigger fear reactions, and make sure to teach the animal (through for instance systematic desensitization and counter conditioning) that they’re not harmful – before they even show fearful behaviour.

In other words, by carefully and gradually presenting stimuli that could trigger innate FEAR, you reduce their power as triggers and you eliminate the learned fears that could otherwise be associated with them.

Animals who are not overly fearful have higher welfare.

Animals who are fearful may show a whole range of behaviour. The fearful crouching dog may tremble, shed hairs, blink, lift a front paw, and so on.

Also, as FEAR escalates, behaviours change. If the animal is cornered, FEAR may switch over into RAGE, another core emotion.

You don’t want that. That’s when things could get dangerous. That’s when animals desperately try to break free using the weapons at their disposal.

By focusing your attention on the emotional state rather than on individual responses that may or may not be shown for any length of time, you can cut to the core of the problem.

By helping the animal change his emotional state, you will change the behavioural manifestations too.

Let me re-phrase that sentence, because it carries some extremely important implications.

When emotions change, so does behaviour.

Behaviour can change, not because the animal learned something, but because emotions changed.

See what I’m getting at?

I’m getting at the fact that people may be fooled to think the animal has learned something, when in fact, all that has happened is that the animal has changed emotions, for instance, by becoming fearful.

This is one of the main problems with punishment as a learning tool.

Say that the dog pulls on the leash. The owner punishes the dog, say, by kicking him and saying “tsssst!” as some dog trainers on TV advocate. The dog stops pulling, and the owner thinks it’s because he’s learned that pulling leads to unpleasant consequences.

That may be so. The owner will likely find out on the next walk.

Or, it could simply be that the dog is now frightened and no longer in that SEEKING mode (another core emotion!) that lead him to pull in the first place.

That’s a double whammy, by the way.

The problem with FEAR is that as arousal escalates, learning goes out the window. The animal may stop responding to known cues, become frantic – or flip into RAGE.

It’s vital to recognize when there’s a FEAR component in a behavioural problem.

Skip this part if you’re not a training nerd.

Still here? Well, I did warn you.

Ever wonder why a VR2 is the optimal Variable Ratio Schedule to keep an animal engaged? In other words, delivering a reinforcer on average on every second response?

Because that ratio essentially implies the maximum amount of unpredictability. There’s 50% chance of getting a reward, and 50% of not getting one. That’s as unsure as it can get.

That type of unpredictability of appetitive stimuli completely hijacks the dopamine system involved in the SEEKING response, that other core emotion. Professor Robert Sapolsky talks about this in this brilliant TED talk – start looking at 26.30 and keep going for about 5 minutes. Then try to stop watching.

If I were a dude, I’d want a beard like that.

Woops. This was going to be about FEAR, not SEEKING. Or beards.

Sorry for deviating, I’ll get back to the subject.

One of the tenets of captive animal husbandry is to allow animals to express species-typical behaviour.

Animals in the wild show an enormous number of different behaviours, easily numbering the thousands if detailed.

How do we prioritize? Which of all those are important?

Which are the core emotions, then?

Well, renowned affective neuroscientist Jaak Panksepp has identified seven of them (and he writes them all in caps). Four of them lead to improved welfare, and three of them may have negative impact on the animal’s long-term health. 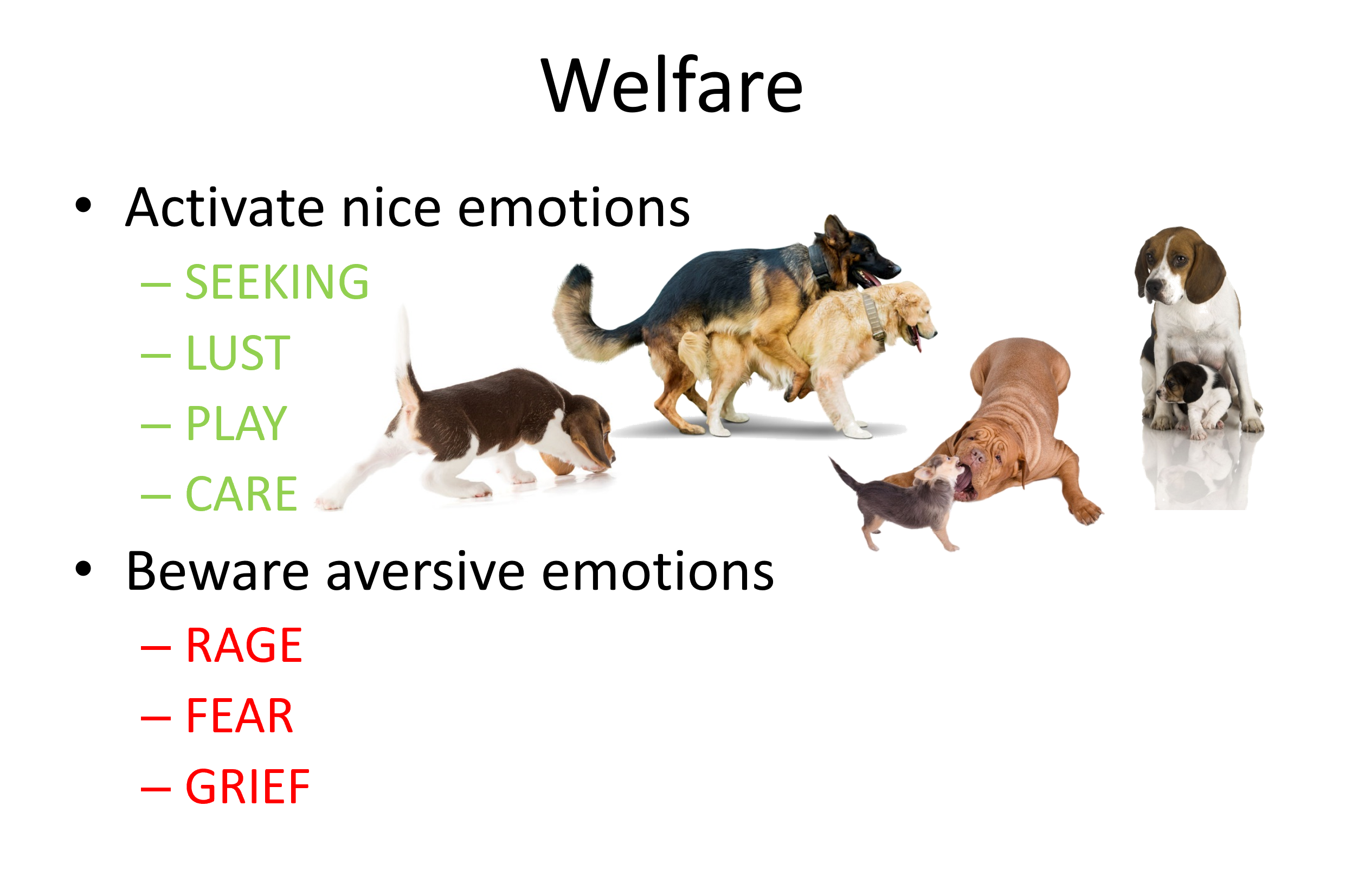 What are the risks of addressing emotions rather than behaviour?

By assigning an emotional state, we move away from observing and start interpreting.  The main risk (among several) in doing so is that of misinterpretation.

Don’t lose track of what the animal is actually doing. It takes a keen experienced observer to know the emotional state associated with a specific behaviour for a particular species. For this reason, it’s often a good idea to keep track of actual behaviours (crouching, ears back, large pupils, wide eyes, weight distribution) in addition to the probable core emotional state – and of course, the context in which they occur, and whether they diminish or intensify as a result of changes in the environment.

Getting back to why I think it’s not enough to just look at observable behaviour – to me it’s problematic in several ways:

It is my firm belief that as trainers we can be inspired by different scientific disciplines – and the field of emotions is one of them.

Oh, and about that leash pulling – what to do then, if punishment is out of the question? I cover that here.

I teach about all aspects of behaviour management – and my online courses are wildly popular. They’re only available occasionally, though – sign up and I’ll notify you! You’ll also learn whenever I offer a free webinar, masterclass – or publish a new blog post.

Panksepp (1998). Affective neuroscience: The foundations of human and animal emotions.

My god, what a GREAT lecture!