Wanna join this experiment on the effect of tone of voice on dog behaviour? Please share what you found with us in the survey!

Read this through to the end before jumping in – I realize you may get the urge to try immediately before even finishing the next paragraph. Specifically: what you should look for when observing your dog?

You should be in the same room with your dog but not engaged in him (or her). Sorry, “it” just seems so impersonal. Your dog should be resting but awake. So, not playing, eating or otherwise busy. After at least five minutes of no social interaction, do one of the following (keep reading to figure out in which order):

Walk up to your dog (no touching). When she (or he) looks at you, you do the experimental procedure.

You talk to the dog for 20 seconds.

What? How can that be an experiment?

Well, you EITHER sound jolly, bouncy and energetic, OR, you sound consoling, reassuring and pitying. First one, then the other, with at least an hour’s break in between. If the dog’s name begins with the letters A-K, start with the pitying tone of voice. If it begins with L-Z, start with the jolly tone of voice. After all, this is an experiment and we need to control for the fact that whatever you do first may influence behaviour later on.

So, for example, if your dog’s name is Akka, you might say in a very lamenting voice “aaaaaaaawwwww, you poooooooor little daaaaaaaaarlinng. Aren’t you the saddest little poochie pooch I’ve ever seen…” Much as you (or some people) might when comforting a crying child. No touching, just the voice, remember. Do this for about 20 seconds, and sound like you mean it.

Observe your dog. What happens? Ideally, film the whole process. Hold the camera so we can hear you and see the dog. Observe for a minute, and the first part of the experiment is done. Your dog is probably a bit confused and may wonder if you’re hurt, but you may have noticed some interesting behaviour.

Get your dog back to his normal self by playing, petting or training, whatever suits you and the animal best. Then wait for at least an hour.

Part 2 for Akka is the same set up but this time you’re talking in an exuberant, energetic, jolly voice. You might say things like “what a happy dog! Such a pretty face! Aren’t you the best little poochie pooch I’ve ever seen!!!” Avoid using cue words that the dog may think means it’s time for play, training or going for a walk. Just sound really happy and engaging. Again, no touching, just the voice. Do it for about 20 seconds, and sound like you mean it.

Again, observe and if possible, film it. Is the reaction different? How?

If your dog is called Luca, start with the happy voice and do the sad voice after. (Names beginning with A-K sad first, L-Z happy first).

You’re done. Or actually, you may have to engage in the animal for a bit. Once you’ve done that, come back here and share what you found in the survey! I’d love to see the videos, so head on over to my facebook site and post a link to your film in the comment’s section of the post related to this blog post (linked films will display in facebook but not on this blog, that’s why).

There are probably tons of differences in body language depending on how dogs are spoken to, but let’s limit this study to looking at ears, tails and body posture.

What are you looking for? 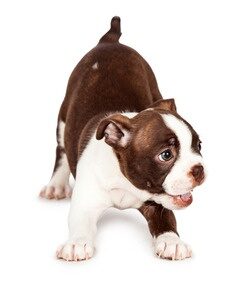 Ears – is there no change? Do they go back/ down? Forward/perking?

Tail – is there no change? Lowered, even tucked? Or about in line with the spine, higher perhaps? Is it wagging?

Posture – what stance does your dog take? Cowering, on back exposing belly? A play bow perhaps?

After you’re done with the experiment and survey, take a minute to consider.

What emotional state corresponds with the behaviours you’ve seen? If your animal is frightened, would you use any of these two approaches to help reduce fear? Or would you consider any other tone of voice?

(let’s limit the discussion here to just the tone of voice, OK? There are a gazillion other things to do, of course – I’ve covered some of them in a series of blog posts).

And then… what would the response of your cat, horse, parrot, spouse or kids be to this experiment, by the way..?

2 Replies to “A challenge to dog owners – join the experiment!”

I want more of Karolina’s knowledge and experience!